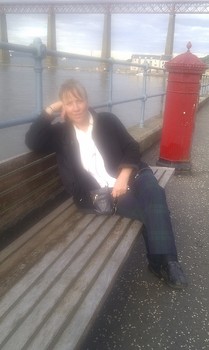 Need someone to show you around Edinburgh?

Whether you' would like me to join your coach for a step on coach tour, guide you around on a walking tour or you'd generally like me to take over and organise your time spent here. Let me know what you'd like to do and I'll help you make the most of your visit.

Tour for 1 hour, 2 hours, half day or more. Your own coach transport or I can arrange.

Use the contact page at the end to get in touch.

Christine's style is very warm, professional and engaging, with a genuine sincerity. In addition to providing interpretation along the route, she also gave useful information of many of the attractions, suggesting the best time of day to visit the castle and how long a visitor would need. 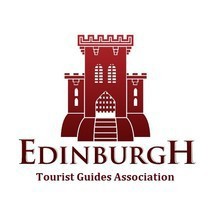 Two tours back to back today one with Driver Brian and then with Ian. Busy day but great fun showing off The City of Edinburgh.

A pleasant afternoon coach tour with Norman and friends. Taking a break in Holyrood Park. Touring around the city before going on to Leith to see, The Royal Yacht Britannnia. .A quick tongue twister before they went -'The Leith Police Dismisseth us' ! you try it!!

Busy walking tour, lots of ground to cover, finishing on the Castle Esplanade.Group of American group of students accompanied by Kimberley - fabulous weather for November unbelievable for this time of year.

Touring around Edinburgh with Brian and new driver Paul.

Highlights Walking Tour with American couple Karyn and Steve Malinconico. An afternoon spent walking through the Old Town, followed up with a visit to the Castle

Two Drivers Andy and Tony brought coach parties from England and Wales for a tour around the city.

Driver Richard arranged a tour to Edinburgh. I joined the coach at the Royal Botanical Gardens and we spent the morning traveling around the city.

24th September 2014. Driver Michael from Cambridge with passengers from Kent

22nd September 2014. Tam brought his passengers from Essex for a tour round the City. Fabulous day - wonderful weather.

12th September 2014. Our Driver Bill brought  his coach of passengers from Grimsby, Lincolnshire and Scunthorpe.Thought the weather was going to be' a wee bit driech' but as always the sun shon through and the 'Scotch Mist' faded. to give a sightseeing tour around this beautiful city then some freetime and shopping.

Cruise Ship Magnifica came into South Queensferry 4th September 2014. Joined this coach party from the ship with driver  David to give them a taste of Edinburgh on a Sightseeing tour around the city stopping off for freetime in the City centre.

Edinburgh University Delegates, before their 'Night Out', at The Caves after an evening walk through the city. Conference starts tomorrow.

With our Driver Stuart from Fitzcharles Coaches, we took a Methodist group of Ladies and Gentlemen from Florida on a sightseeing visit to the capital before their evening at the Royal Edinburgh Militery Tattoo at Edinburgh Castle. 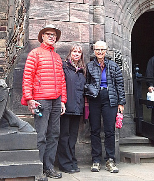 Bill and Meredith Savery from America. A walking tour around a city bursting at the seams with every form of street theatre. It's International Festival and Fringe time. Singers, dancers, hairbraiders, portrait painters, actors, living statues and lots,lots more. This IS the place to be. Finished off with a tour around the castle. This couple will definately sleep soundly tonight. They took a 3 hour walking tour on top of only 3 hours sleep and jet lag! Here we are outside the Scottish War Memorial in the castle. Tomorrow, after visiting some of the Fringe shows they will be going to The Royal Edinburgh Militery Tattoo - a spectacular event. 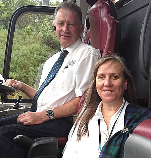 Hopped on Alan's coach at the east end of Princes Street to welcome visitors from Kent in England to the beautiful city of Edinburgh. Alan drives this way quite often and each time he brings passengers who are very soon enthrawled with the scenery and folklore and maybe one or two nursery rhymes too!

A busy day picking up Swiss German speaking passengers from the Port of Leith from their cruise ship. I speak no German, so Marseis took the microphone and did a wonderful job of translating the history, culture and fokelore that I wanted to impart. Our driver Tommy,(a real star),  after much perseverance had Marseis saying" Edinburgh" as we do in Scotland and sounding like a native! We travelled all over the city Old and New and even popped out to South Queensferry to see the Iconic Forth Road and Rail Bridges and the beginnings of our new bridge 'The Queensferry Crossing'. 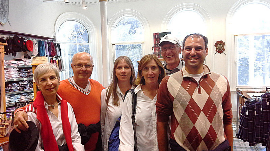 Enrique, Carol, Robert, John and Lee spent half a day treking around the sights of Edinburgh. Visting Gladstones Land and the Georgian house and covering the changes between the Old and New Town. Finally left them at Romanes and Paterson to enjoy a well earned rest and Scottish Fare before taking a taxi back to their cruise liner at South Queensferry.

A midday tour around the old town of Edinburgh, through the Grassmarket and into Holyrood Park. Another fantastic driver, this time with a group from the Cambridge Area.

With Kevin, fabulous driver from 'Lochs and Glens'. (Am I just lucky with drivers or are all drivers fabulous?).  A midday tour around Edinburgh with a photo stop on the south side of Arthurs Seat overlooking the city.  A glorious day and great fun, passengers from Sussex and Surrey - they'll be back!

Saturday 12th July 2014 The Embere's and the Bacon's from America

A pleasant afternoon spent making our way through the  'Old Town'. Starting at Gladstones Land, we wandered up to the Castle, detouring to the Grassmarket and Greyfriars before rejoining the Royal Mile. A visit to the Canongate Church graveyard (resting place of Adam Smith and 'Clarinda' - one of Robert Burn's Ladyloves. It was such a lovely day we popped into Dunbars Close to see the almost secret replica 16th century garden too. 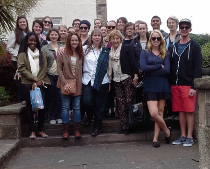 Afternoon walking tour with an American group of students from Imperial college. Some coins were left at the grave of Adam Smith (the father of modern economics) in the Canogate Churchyard for good luck. Adam Smith of course the famous economist and writer of the Theory of Moral Sentiments and the Wealth of Nations. He was born in Kirkcaldy and spent much of his time here in Edinburgh - his final resting place at the Canongate.

A friendly group of lecturers, students and friends - took an early evening tour in the Old Town - think I just about walked their socks off!  Temperatures in the 20s again!

Here we are just outside the Scottish Parliament having a well earned rest.

Nicola Sturgeon ( Deputy leader of the SNP Scottish National Party and therefore Deputy First Minister of Scotland) passed us and gave a smile. I'd already been asked my views on the Scottish Referendum - so was proud of my groups restraint when I explained who she was ......

If you want to know my views - you'll need to come on one of my tours! 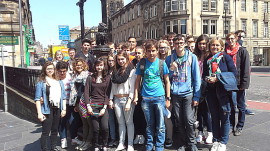 French speaking students from College Champagnat.  A lot of faces were pulled and shrieks were heard when their Head Teacher translated the gory details of Burke and Hare! Fabulous weather today - a heatwave for Edinburgh - 20 degrees! Tomorrow expecting a downpour - thunder and lightning - the works! 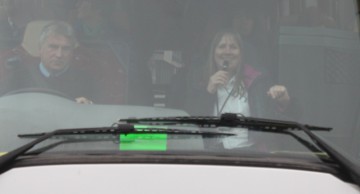 Saturday 24th May 2014. Half day tour for Morrisons Off Shore Tours

English speaking tourists from all over the world arrived at South Queensferry on the outskirts of Edinburgh for a half day tour around the city and a trip up to the castle. 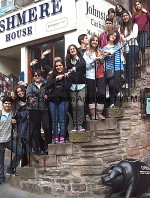 Argentinian group taking a photo break on the steps of Gladstone Land at the top of the Royal Mile after a busy morning sightseeing with a tour in the Old Town and passing JK Rowlings haunts. At the City Chambers we saw her gold painted handprints at the entrance - tiny hands! We visited some of the places where she got her inspiration for characters and location plots from. Next stop the castle. 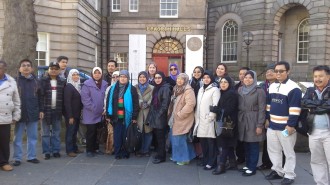 Smiley happy visitors from Kuala Lumpa The weather was bittely cold -they're used to 30 degrees -but it was struggling at 2 degrees plus wind chill factor! Half day tour down to South Queensferry to see the iconic Forth Road and Rail Bridges and then coach tour around Edinburgh. 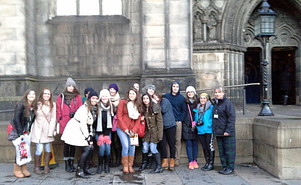 Part of a larger group of American students staying in London on a weeknd trip to Edinburgh University. We started in the New Town and then up to the Old. Extra excitement and camera clicking when we went through some of the areas and themes said to have been used by J K Rowling, as her inspiration for the Harry Potter books. 'Diagon Valley', 'Hogwarts', 'Thomas Riddles Grave' and the 'Elephant House Cafe'. 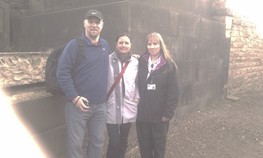 The Frazier's from America. We took a lovely walk from the Castle Esplanade down through the closes of the Royal Mile. Visiting Greyfriar's Churchyard and The Grassmarket on the way then finishing up at Waterloo Place and The Old Calton Burial Ground.

Soccer Girls from America joined me for a walking tour after their visit to Edinburgh Castle.  You can just make out the life size statue of a very famous wee doggie, 'Greyfriars Bobby'

I joined a coach tour with the Womens Fellowship group and we spent a couple of hours driving around the sights of Edinburgh.